The Past Perfect Continuous

English has a relatively limited number of verb tenses in the past, but native speakers use all of them both formally and informally, in speech and in writing. The past perfect continuous is a good example of that. You might think it’s an unusual and complex form only found in books or formal papers, but it’s a structure used daily by any mother tongue speaker. So what is it and when do we use it? Read on to find out!

A Quick Review of the Past Perfect Simple

The past perfect simple is used to refer to something more in the past than another action or situation. For this reason it’s almost always found in combination with the past simple. For example,

When I left university I’d already found a job.

This means that the action of finding a job happened before leaving university.

When to use the Past Perfect Continuous

We use the past perfect continuous to refer to an ongoing action that ended before another action/event in the past. For example,

I’d been looking for a job for several months when I found this position.

As with all continuous forms, when we use the past perfect continuous we’re focusing on the action itself and possibly also the effect on the subject, rather than its completion. For example,

The workers had been unloading the truck when the storm started.

We don’t know if the unloading was completed or not, and it’s not important. The focus is just on their action.

How to form the Past Perfect Continuous

We create sentences with the past perfect continuous by using ‘had been’ and the main verb in the -ing form. Here is a table with an example for all the subjects in the affirmative, negative and interrogative forms: 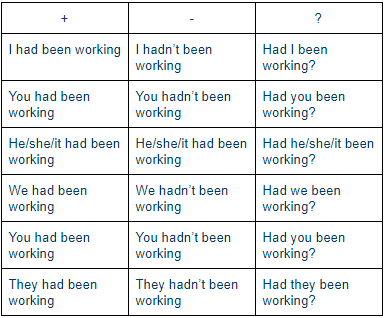 The short answer form is Yes, I had./No, I hadn’t. And the auxiliary ‘had’ is often contracted to ‘d.

Here are some other examples of the past perfect continuous:

By the time we finished the meal, we’d been sitting around the table for six hours!

Hanen had been playing well when the game was interrupted due to heavy rain.

We’d been preparing the house for hours before the first guests arrived.

The meeting ended after they’d been negotiating all afternoon.

She’d been going to the same hairdresser’s for years before it shut down.

He hadn’t been feeling well for a long time when he suddenly collapsed at work yesterday.

She was covered in flour because she’d been making a cake.

Had the car been working well before the accident?

It hadn’t been snowing for long when the children tried to make a snowman.

How this tense compares to the Present Perfect Continuous

As you perhaps remember, we use the present perfect continuous to focus on the duration and effect of an ongoing action. For example,

You’re here finally! I’ve been waiting for over an hour!

We use the continuous form of the past perfect in a similar way but in the past. For example,

I’d been waiting for over an hour when Mike finally arrived.

When not to use the Past Perfect Continuous

Being able to use continuous forms like this one will transform your communicative skills when you need to talk about the past. So in the coming days, try to start applying it when you can. Instead of describing actions in chronological order, switch them round so you can use the past perfect, either in the simple form or continuous form. Practice makes perfect!

Why not start practicing now by doing the short quiz on this post?

A pronoun is a word that substitutes a noun. We use pronouns when the listener/reader knows who or what we’re referring to. Learn more here!

The passive form is a very useful structure in English. Read more to find out what it means and how to use it in your everyday English.