The Past Simple Tense is used to refer to actions that were completed in a time period before the present time. In the Simple Past the process of performing the action is not important. What matters is that the action was completed in the past. The action may have been in the recent past or a long time ago.

So let’s start learning the Simple Past Tense – one of the most common tenses in spoken English – and the points to pay attention to.

Using the Simple Past Tense

I saw a movie last week.

I finished work, walked to the beach and met my friends.

I lived in Italy for five years.

I often played football when I was a young man.

Forming the Simple Past 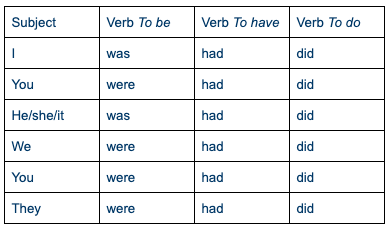 Affirmative sentences in the Simple Past

In affirmative sentences the word order is subject + verb and the form of the verb in the simple past is the same for all subjects (with the exception of ‘to be’ – was/were).

He saw his family last week.

I was in France in June.

Negative sentences in the Simple Past

To make negative negative sentences in the simple past we use the auxiliary ‘did not’ / ‘didn’t’ and the base form of the verb.

Subject + did not + base form of verb + object

They didn’t go to the theater last month.

She didn’t arrive on time this morning.

Questions in the Simple Past

To make questions in the simple past we use ‘did’ in front of the subject and base form of the verb.

Did you play football yesterday?

Did they lose the match?

Did he clean his home last weekend?

By learning the simple past you can describe many things about your personal and professional life. So start practicing it now by doing this fun quiz.

This post has been adapted and translated from the original content by WSE Turkey here: Simple Past Tense

You have already learnt how to use Present Perfect Simple form. So what is the present perfect continuous and how does it differ to the simple form? Read on to find out more.

View exercise
What is the Future Perfect?

If you’ve already studied the present perfect form, you’re probably wondering how there can be a future perfect tense. Well, read on to find out!