How to Learn Regular and Irregular English Verbs

In order to use many verb tenses in English, you need to know the past forms of the verbs. All verbs have a base form or ‘infinitive’ (for example, look, make, play). The majority of verbs, called ‘Regular verbs’, follow the same pattern and create the past simple and the past participle using the same word ending, -ed. There are, however, verbs that have different endings, and these are called ‘Irregular verbs.’ At Wall Street English you learn the regular and irregular verbs gradually throughout your course, which makes them easier to learn and remember. Here is a “how to learn regular and irregular verbs” with examples and also some tips on how to remember them.

An Overview of English Verb Forms

Every verb in English can have a base form, an -ing form, a past simple form and a past participle.

We use the base form for:

We use the -ing form (or the gerund) for:

And we use the past participle for:

What are Regular Verbs?

Regular verbs in English create the past simple and past participle by adding -ed to the base form.

If the verb ends in a consonant and -y, we change the -y to -i and added -ed. For example:

If a verb ends in -e we simply add -d, For example:

Here are some examples of regular verbs:

“Raul has accepted the job offer.”

“Have you finished yet?”

“We really liked the film we watched last night.”

There are three ways to pronounce -ed, depending on the last letter of the verb.

What are Irregular Verbs?

There are about 200 irregular verbs in English. We can divide these into four types:

“Our car cost a lot of money but it’s always breaking down.”

“Pasha hurt himself in a soccer match last weekend.”

“My parents have let me stay out late tonight.”

“They put on their jackets because it was very cold.” 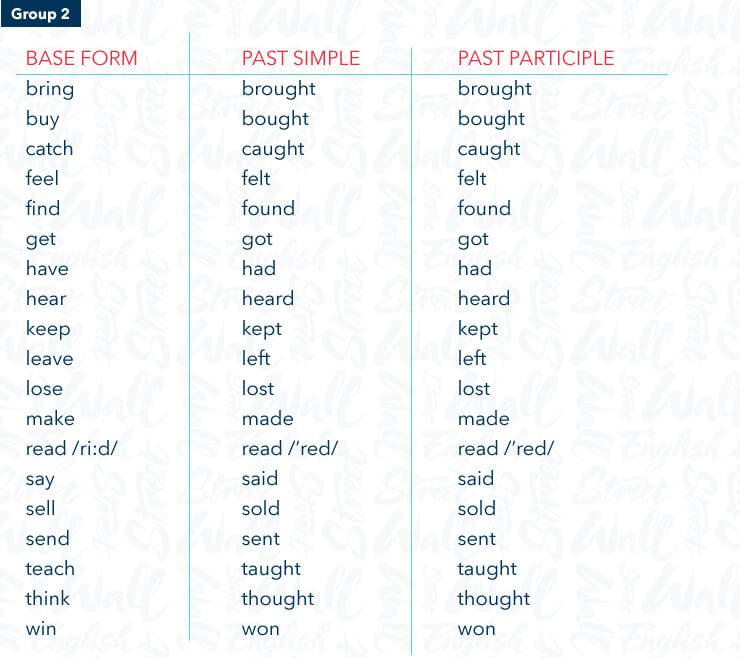 “They had lunch at a Thai restaurant on Monday.”

“Have you heard the news about the train strike?”

“Tim has sent an email to all the suppliers.”

“Suzi has become the Managing Director.”

“The dog ran into the garden after Lee opened the door.”

“Has Mrs. O’Connor come back from lunch yet?” 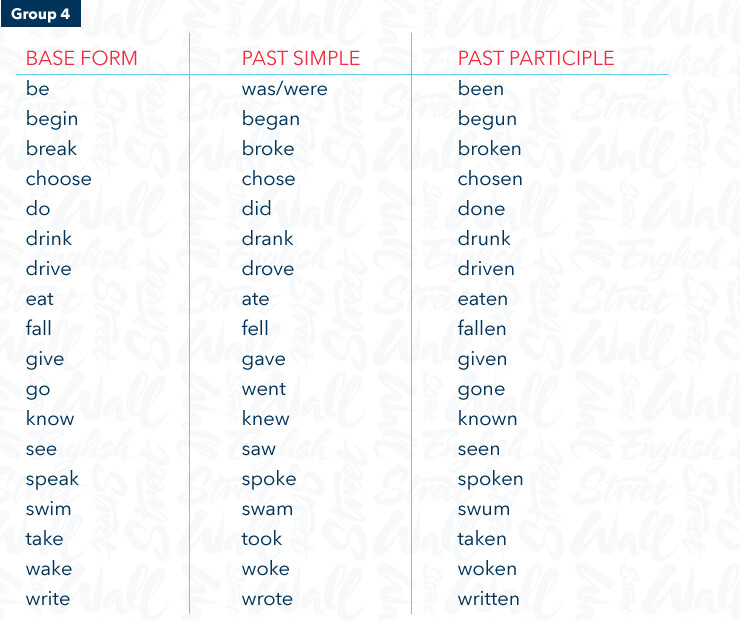 “The kids ate a lot of cakes at the party.”

“They drove to the airport and left their car there.”

“Has she taken her tickets yet?”

“I’ve written a letter of application for the manager’s job.”

So, what’s the best way to learn all these irregular verbs?

Wall Street English is pleased to announce the opening of five new Wall Street English learning centers in September, bringing the total number of new centers opened this year to 16. The most recent openings are in located in Italy, Vietnam, Malaysia, and Portugal.

Are you trying to find the best way to learn English? Have you tried one or two methods that didn’t work for you? Which method can give you the English skills you need when you work or travel?