blogLearning to Use the Past Simple in English

Learning to Use the Past Simple in English

Have you ever wanted to describe a past situation in English and didn’t know how to do it? The past simple is one of the most used verb tenses in English along with the present simple and present continuous, so it’s important to understand how to use it. Once you know the past simple it’s much easier to have a conversation and communicate clearly to the person you’re talking to.

So let’s look at how to use this verb tense.

When is the past simple used?

The past simple has several uses:

For example, “I had dinner with my friends yesterday.”

For example, “I received the good news and immediately called my family.”

For example, “She always travelled to Miami on vacation when she was a child.”

For example, “He didn’t find a job for years.”

The basic structure of the past simple is:

So all you need to do is to put the verb in its past form. There are two types of verbs – regular and irregular.

Regular verbs are easy because you simply have to add -ed, -d, or -ied.

I visited my family last summer.

He changed his job in February.

You studied architecture at University.

Irregular verbs don’t follow a rule and often completely change their form. In this case you have to learn and remember them. Here are some of the most common irregular verbs: 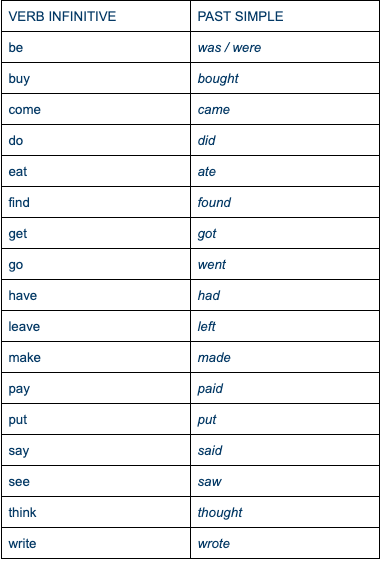 I bought this car last summer.

She went to the cinema yesterday.

He was sick at the weekend.

They were late and missed their flight.

In the simple past negative sentences are created by using the auxiliary ‘did’ with ‘not’ – didn’t. The structure is:

I didn’t pass the exam.

The structure is the same for all subjects.

As you know, we add ‘do’ at the start of the basic structure to make questions in the present simple. It’s similar in the past simple, but in this case we add ‘did’ (the past of ‘do’).

Did you go to the theater last weekend?

In most tenses, whether in the present, past or future, we use adverbs. Adverbs help us define and understand when something happened or will happen. Knowing what adverbs mean will really help you understand dialogues and texts. Here are some common time adverbs:

Did you stay at home last night? No, we went to the cinema.

They merged with another company last year.

His train was late.

If you want to speak English well, it’s essential to know the most common verb tenses, including the past simple.

At Wall Street English you can learn all the verb tenses in a practical and fun way through listening and speaking. Our method of interactive learning and speaking time in small classes with a native English teacher enables you to quickly become confident in using English.

Are you ready to see how well you know the past simple? Try this fun quiz!

This post has been adapted and translated from the original content by WSE Argentina here: Aprendé a escribir oraciones en inglés en pasado simple

Learning and improving your knowledge of business vocabulary is a must. Read on to find out more.

Read article
4 Apr 2018How to Prepare for the PTE Exam

Do you want to know how to prepare for the PTE Academic Exam? Find out what the Pearson Test of English Academic is, how to prepare, how to improve your score, and where you can do your PTE Exam now!