We use the present simple tense for the following situations:

As you can see, we simply use the base form of the verb ‘play’ for all the subjects, except the third person singular, where we add -s. For example:

You have a beautiful car.

We want a sandwich.

I live in the city center.

To create negative sentences we add ‘don’t’ for I/you/we/they and ‘doesn’t’ for he/she/it:

We don’t have time.

They don’t come from this city.

You and your brother don’t eat fish.

And to make questions we add ‘do’ for I/you/we/they and ‘does’ for he/she/it:

Do we need to make a reservation?

Do you think it’s a good idea?

Does it rain much here?

Do I have time for a coffee?

Do they want something to eat? 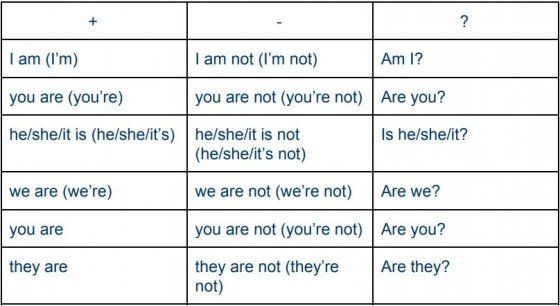 You’re not a student, are you?

Having such a simple structure for most subjects can make you think it’s very easy to use the present simple, and it is in many ways. But it’s really important to remember the one subject that is different because forgetting to use the -s for verbs in the third person singular is very noticeable. So it’s a really good idea to focus on learning and practicing it to be a good English speaker.

There are three ways to add -s to verbs in the present simple, according to the spelling of the verb:

My Dad fixes things in our home.

The weather always gets worse in November.

He doesn’t want to go out.

She doesn’t need any more clothes.

The present continuous (also known as the Present Progressive) is used in these situations:

To create the present continuous we use the verb ‘to be’ and the gerund (or -ing form) of the main verb. The affirmative form of the verb ‘to play’ is as follows:

To make questions with the present continuous we invert the subject and the the verb ‘to be’.

We’re going out. See you later.

Ted’s working in the garden.

What are the children doing?

How are you feeling?

Why are you wearing a sweater? It’s hot in here.

Giulia is staying with her sister at the moment.

There are some verbs that we never use in the present continuous tense because they are states and cannot have a progressive form. These verbs are preference and state verbs, such as: know, have (for possession), like, love, prefer, hate, want, believe, own, cost. For these and similar verbs, we use the simple tenses.

The Present Continuous for the Future

When we talk about a fixed event in the future we often use the present continuous. It’s particularly common when you refer to appointments in your agenda, For example:

I’m going to the dentist on Tuesday at 10am.

He’s having a haircut this afternoon.

What time are you leaving?

You’re looking after the kids tonight.

When you are not sure whether to use the present simple or the present continuous, ask yourself these questions:

As you can see, we use these two tenses in many daily situations so they’re really useful to learn as well as you can. Try to practice them a lot until they become natural, and pay special attention to the third person singular form because it will really make a difference in your accuracy in conversation.

The past perfect simple is used to refer to something more in the past than another action or situation. Read on to find out more!

Question words are words we put at the start of a question to ask for particular information. Want to know more? Read on here!