There are many occasions in which we need to describe an event or action that happened, and very often that includes repeating what someone said. Such occasions can include a social situation as well as in a work email or presentation. In order to describe what people said there are two different types of speech – direct speech and indirect speech (or reported speech).

Read on to find out more about these forms and improve your English storytelling skills.

It is very common to see direct speech used in books or in a newspaper article. For example:

As you can see, with direct speech it is common to use the verb ‘to say’ (‘said’ in the past). But you can also find other verbs used to indicate direct speech such as ‘ask’, ‘reply’, and ‘shout’. For example:

When we want to report what someone said without speech marks and without necessarily using exactly the same words, we can use indirect speech (also called reported speech). For example:

All the other tenses follow a similar change in indirect speech. Here is an example for all the main tenses: 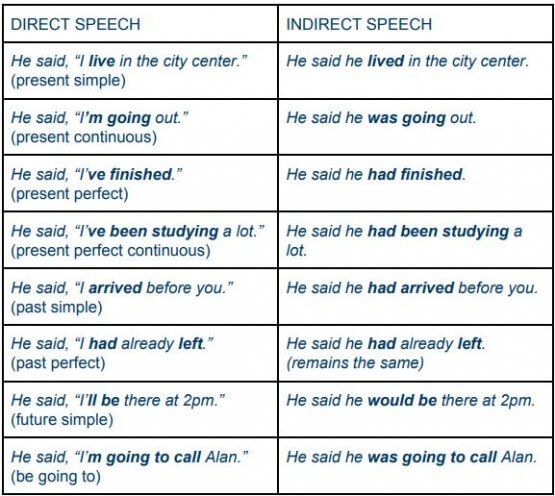 The same rule of moving the tenses one step back also applies to modal verbs. For example:

As an alternative to using ‘say’ we can also use ‘tell’ (‘told’ in the past) in reported speech, but in this case you need to add the object pronoun. For example:

Sometimes it’s necessary to change the time expressions when you report speech, especially when you are speaking about the past and the time reference no longer applies. For example:

When you report a question you need to change the interrogative form into an affirmative sentence, putting the verb tense one step back, as with normal reported speech.

As you can see, in the reported version of the question, ‘do’ is eliminated because it is no longer a question, and the verb ‘live’ becomes ‘lived’.

When we report a question we normally use the verb ‘ask’. As with the verb ‘to tell’, the verb ‘to ask’ is normally followed by an object pronoun, though it is possible to omit it.

When you give someone an order, you use the imperative form, which means using just the verb without a subject. For example:

To report an order we use ‘tell’ and the infinitive of the verb. For example:

When you make a request, you normally use words like ‘can’, ‘could’, or ‘will’. For example:

To report a request, we use the verb ‘to ask’ and the infinitive form of the verb. For example:

Now you’ve seen how we use direct and indirect speech, practice using them yourself. An excellent and easy way to see how they are used is by reading a short story in English or a news article online, because stories and articles contain many examples of reported speech.

The first conditional is one of four types of hypothetical sentence in English. In which situations can we use it and why? Find out here.

The first verb tenses an English student learns are the present simple and the present continuous. Here is a guide on how to create and use both tenses.